The S&P 500 index is a very popular benchmark for U.S. stocks. Even Warren Buffet is a fan. For the fortune he’ll leave behind, he’s requested a 90% allocation in an S&P 500-based fund.

There are many S&P 500 mutual funds. There are also exchange-traded funds (ETFs) like the SPY (SPDR S&P 500). Despite the S&P 500’s popularity, we think there are better choices for non-TSP investing. This is true whether you buy and hold or invest actively (market timing, seasonal strategies, etc.).

Equal weighted instead of cap weighted

One problem with the S&P 500 is that it’s market cap-weighted. This means larger companies get more “weight” in the index. At the time of this article, Apple makes up 3.88% of the index. Some smaller companies have less than a 0.015% weighting.

This has several disadvantages. First, smaller companies usually grow faster. They also perform better than large stocks over the long term (more on that in a minute). In addition, cap weighting hurts diversification. There are 500 stocks in the S&P 500, but 10 companies determine almost 20% of its performance.

Fortunately, there’s a solution. Funds like RSP (Guggenheim S&P 500 Equal Weight ETF) give equal weight to each stock in the index. Since 2004, RSP has an annualized return of 9.25% compared to 8.07% for the SPY.

The S&P 500 is made up of large stocks (“large caps”). Years ago finance academics discovered small-cap stocks outperform large caps. Since 1972, the annualized return of small-caps is 11.84% compared to 10.17% for large caps.

The most popular small-cap index is the Russell 2000. A popular ETF based on the Russell 2000 is IWM (iShares Russell 2000). The IWM has outperformed the S&P 500, but we can improve our results by digging a little deeper.

Mid-cap stocks don’t get as much attention as small caps, but they’ve done even better. Since 1972, their return has been 12.04%. Since ETFs haven’t been around that long, we can only compare the MDY (mid-cap ETF) to the IWM since 2001.  In addition to a higher return, the MDY had a slightly smaller drawdown in 2008 and better risk measurements. 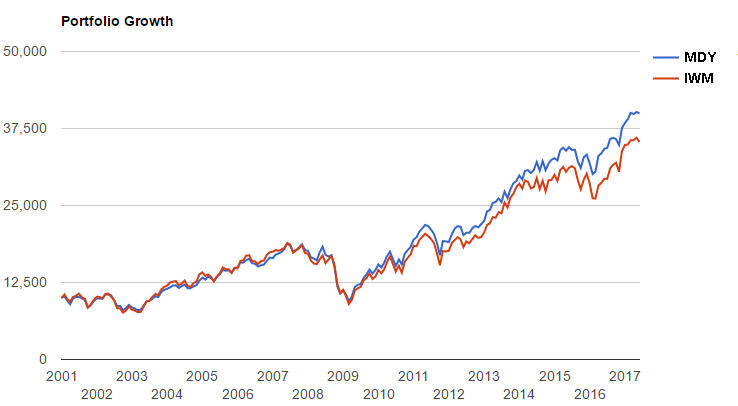 If you want to invest in small-caps, we favor the IJR (iShares S&P SmallCap 600 Index Fund) over the IWM. It’s based on an index of 600 small-cap stocks that must pass a financial test. Since 2001, its return has been 9.60% compared to 7.99% for the IWM. Or you can do a 50/50 split between MDY and IJR for better diversification.

A new trend may already be underway. The EFA (iShares MSCI EAFE international ETF) is up 14.43% from January-May 2017. By comparison, the SPY only has an 8.48% gain. Almost all financial measures–such as the price/earnings ratio–suggest international stocks are a better value than U.S. stocks. And emerging markets are even cheaper than developed foreign nations.

The EFA is very similar to the I Fund. Other foreign funds may be more attractive, though. One is the EFAV (iShares Edge MSCI Min Vol EAFE ). The EFAV is similar to the EFA, but invests in lower-volatility foreign stocks. This means their prices fluctuate less. Sine 2012, it’s had a higher return than the EFA while its max drawdown was much lower (8.54% vs. 18.76% for EFA).

We also like GVAL (Cambria Global Value ETF). It invests in the least expensive worldwide stock markets. It’s not a low-volatility fund, though. It’s had some large drops and fluctuations. Still, it’s outperformed the EFA and even the S&P 500 since 2015 (GVAL started trading in mid-2014). Very few international funds have done as well in that period.

We’re about to post an additional report for TSPKey members. It covers a “quant” mutual fund that’s managed more like a hedge fund. Below you can see its performance vs. the S&P 500. In addition to better returns (13.92% vs. 10.25% annually), it’s had a much better performance when stocks fall–mostly due it’s hedging feature.

There’s usually a $1 million minimum invesment for the fund. However, we found a broker who allows you to invest as little as $2,500 in an IRA. The fund stops accepting new investors afterJune 30 this year, so time is running out.

We’ll also cover a couple of other “quant” funds that have outperformed the S&P 500.

TSPKey does not give personalized investment advice. This is for informational and educational purposes only. Past and/or hypothetical performance is not an indication of future performance. In our non-TSP accounts, we currently have positions in RSP, MDY, EFA, EEMV, GVAL and DLS. Data and charts courtesy of PortfolioVisualizer.com with some modifications.