Does this look like a good time to hold stocks? 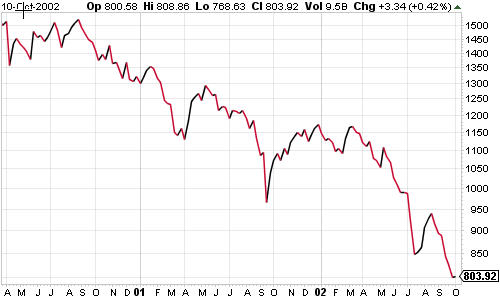 This was the crash following the “dot-com bubble.” In less than 3 years, the S&P 500 fell more than 50% from its peak. Some analysts called it a once-in-a-lifetime event. Then, just five years later, this happened:

Did the wild, account-shrinking ride from 2000-2009 (the “lost decade”) kill buy-and-hold? Some think so, but there’s not much evidence. Financial advisers still tell us “you can’t time the market.” The financial media still claims buy-and-hold is a good strategy based on selective studies.

Despite its continuing popularity, you should consider three powerful arguments against buy-and-hold. We’ll cover the first—risk management—in today’s blog.

What do business, military operations, sports, politics and even professional gambling have in common? Risk management. In all these fields, planning and strategy are important. And managing risks is a big part of any strategy.

Buy-and-holders, on the other hand, choose to ignore market dangers. Other than diversification, they have no risk-reducing tools. Since the TSP Funds are already well-diversified, this isn’t an issue anyway. There’s no risk of owning an individual stock that could go bankrupt in your TSP account.

If the whole stock market falls

If the market plunges, buy-and-holders have no exit plan. They only have faith that stocks will rebound. In the long-term this has worked so far—at least in the U.S. However, it can take years or even decades for stocks to recover from a big crash. That’s why some critics call it “buy and hope.”

Investors learned this the hard way during the lost decade. Some had to postpone their retirement plans. Others were already retired. They could only watch as a big chunk of their savings disappeared. Many were forced to reduce their quality of life or go back to work.

Everybody has a plan

It’s one thing to plan for good outcomes, but what if things go wrong? As legendary boxer Mike Tyson said, “Everybody has a plan until they get punched in the face.”

Figuratively speaking, the markets will punch you in the face sometimes. When it happens, what will you do? Buy and hope…or put a risk management plan into action?